Matrix: A Journal for Matricultural Studies

Matrix: A Journal for Matricultural Studies (Matrix) is an open-access, peer-reviewed and refereed scholarly journal published by the International Network for Training, Education, and Research on Culture (Network on Culture), Canada. Matrix is published online twice yearly (May and November).

Matrix is a new journal in the humanities and social sciences, founded to provide an interdisciplinary forum for those who are working from the theoretical stance of matriculture as a Geertzian cultural system. Similar to other cultural systems such as art, religion, or mathematics, employing the heuristic of matriculture allows for, among other things: cross-cultural comparisons; fresh insights into the social roles of women, men, otherwise identified, children, and the entire community of humans, animals, and the environment; and/or renewed understandings of historically mis-labelled cultures. With Guédon’s work in mind, then, and based on Geertzian principles, the concept of matriculture is both a model of reality by rendering the structure of matricultures apprehensible and a model for reality, where psychological relationships are organized under its guidance.

We encourage submissions from scholars around the world who are ready to take a new look at the ways in which people - historically and currently - have organized meaningful relationships amongst themselves and with the natural environment, the myths, customs, and laws which support these relationships, and the ways in which researchers have documented and perhaps mis-labeled the matricultures they have encountered.

To join our private mailing list and receive notification of new issues, send a request to the email address below here.

For further details about the journal:

An Introduction to Matriculture, the Concept

Culture is a way of thinking, perceiving, and acting in the world that is shared and transmitted from generation to generation by a group of people who live together. Since it needs to be learned, shared and transmitted, to have a culture means that more than a single person must think the same way or, at least, use the same terms of reference. That is, each culture depends on its own unique language that expresses the particular ideas and ways of thinking shared by people in the group. Language, then, is an essential vehicle for culture. It is important to distinguish between the way people act, which is their social behaviour, and what their actions mean to them, which is culturally constructed.

Matriculture is an abstract concept referring to an aspect of culture that can be found in many cultures, like ‘art’, ‘religion’, or 'common sense'; initially articulated by Clifford Geertz, these are known as cultural systems. Cultural systems are interlocking systems of meaning, most of which may be found across all human cultures; they take different forms in each one (cultural systems which are strong in one culture may be weak in another; no culture is without some cultural systems). Matriculture may be very strong; it is often weak, but it may be developed to encompass a large portion of the cultural context. This may include those aspects of culture, or ways of thinking, that pertain to women, motherhood, genders and personhood, or other similar features having developed to the point where people identify themselves socially and philosophically through their mother or their mother's kin, clan, or lineage (as seen in matrilineal societies). However, some cultures may continue to be patrilineal even though there are other signs of a flourishing matriculture. Like the other cultural systems mentioned above, matriculture has many expressions, some of which may be contradictory (for example, which more comprehensively describes a religion: its dogma or the behaviour of the faithful?).

As a cultural system, matriculture corresponds to ways of thinking that may support many different and varying social behaviours. These include, for instance, matrilineal kinship systems (clans or lineages), matrilocal families (where the young couple reside with or near the bride’s parents), matrifocal societies (where households are normally led by women), or matriarchates (systems of governance where women have as much if not more political and/or economic power and authority than men). Some matricultures, such as the Minangkabau of Indonesia, are both matriarchal in their governance and matrilineal in their kinship systems at the same time, while other matricultures are organized on matrilineal kin groups or, such as the one emerging in some African American societies, are simply matrifocal families. We still have a lot to learn about these various societies. 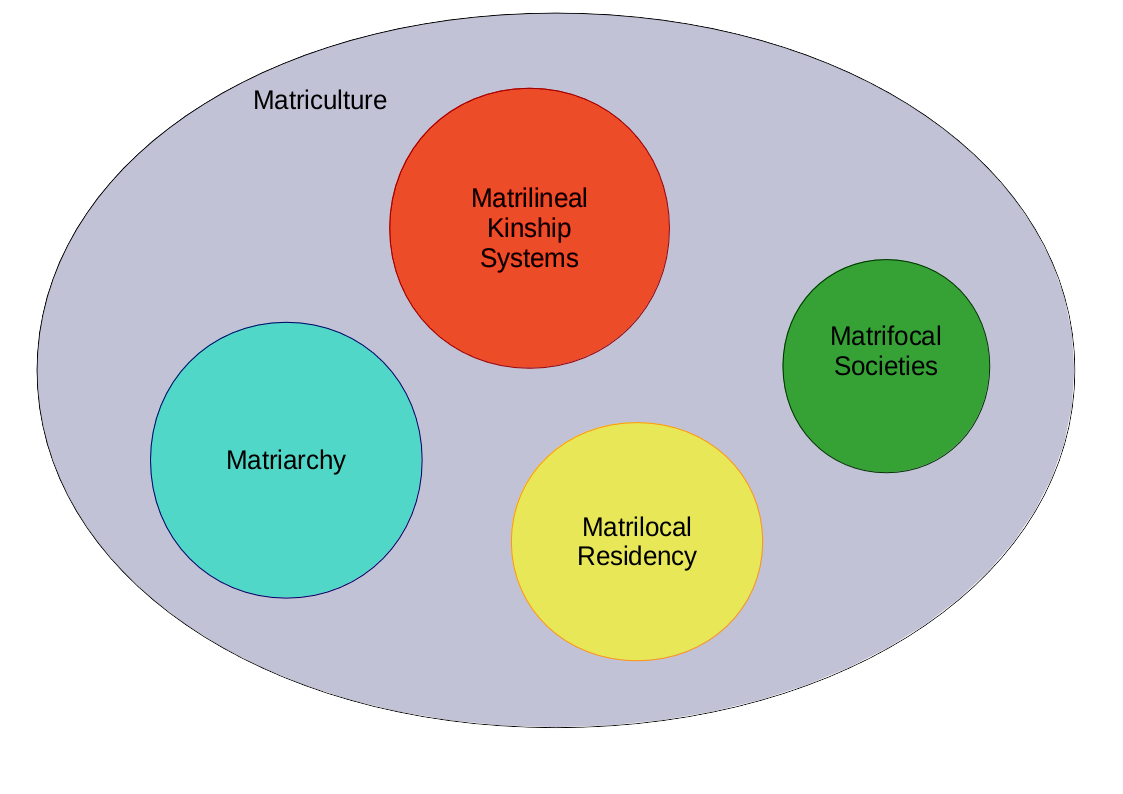 Another important marker is the importance of the mother’s brother and the mother’s mother in raising the children. Instead of looking to their father, especially, little boys are taught to behave like their mother’s brother (their maternal uncle). Often, in matricultures, the mother’s mother takes care of her grandchildren a lot (the maternal grandmother). These older, usually menopausal women usually hold a position of respect in matricultures, unlike their role in patriarchies where they have value only though their sons. In matricultures, older women are teachers and holders of traditional knowledge and they are entitled to and entrusted with creative roles, including adaptation to changing conditions.

Where else can you find markers and indicators about matriculture? An important place to begin is by looking at the traditional stories and mythologies. Who created the world? If a female figure is the creating force or is part of a partnership with her brother as co-creators, that is a sign of a matriculture. Do women have agency in the myth? That is, do they act on their own behalf or are they the prize won by the male figure? If they act on their own behalf, that is an indicator of a matriculture. If they are only a prize, probably not.

Some economic and political behaviours, like women handling money for a household or the larger community, or women holding high political offices, may also be indicators of matriculture.

There are no markers and indicators which MUST be present for a matriculture to exist, and even if several are present, that society may not be a matriculture. For example, some matricultures have military aggression built into the society, where the women handle all the matters of life while the men are away at war (and since masculine status often rests upon military glory, they are usually away at war). In other or the same matriculture, women actively participate in war alongside men.